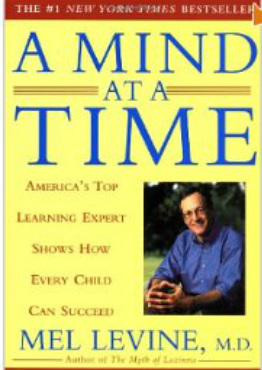 A Mind at a Time: America’s top  learning expert shows how every child can succeed. Dr. Levine says that the neurodevelopmental framework serves as an organizing structure to help educators understand learning and learners. The human brain is a like a complex orchestra; each player’s role varies depending upon the situation. In his #1 New York Times Bestseller, A Mind at    Time, Dr.  Levine shows parents and those who care for children how to identify these individual learning patterns, explaining how they can strengthen a child's abilities and the bypass or help overcome the child's weaknesses, producing positive results instead of repeated frustration and failure.

When students are having difficulty with a particular academic skill, the task of parents, teachers, and clinicians is to pinpoint the areas of difficulty, to specify the weak sub-skills, and to create a
plan for strengthening strengths as well as areas in need of improvement. Therefore, it is helpful to understand how a student's profile of strengths and weaknesses affects both his/her learning and school performance at any given time. The Center for School Success  looks at a student’s learning profile in terms of eight neuro-developmental constructs.
ATTENTION
Attention is a system of controls that can help students with such tasks as working
consistently each day, focusing on the right details when reading, and thinking
ahead about what to say. Attention is grouped into three areas. The first area
is mental energy control, the alertness or energy for thinking. The second is the
processing control, where both visual and auditory information is received.The third
area is the production control, or output center.

LANGUAGE
Language involves receptive (processing and understanding incoming oral and
written information) and expressive (communicating and producing ideas orally
and in writing) functions. Language skills are described in terms of a hierarchy
from the sound (phonological) level at the bottom to extended language (discourse)
level at the top. Being able to articulate and understand language is central to the
ability to do well in school. Developing language functions involves elaborate
interactions between various parts of the brain since many separate kinds of
abilities are involved — for example, awareness of different sounds, pronouncing
words, comprehending written symbols, understanding grammatical structures,
and telling or writing stories.

MEMORY
Memory is the ability to record, retain/store and then retrieve learned information,
facts and skills. School places more of a burden on memory than most careers.
Once aperson has understood, organized, and interpreted information, she must be
able to file it in memory, and then later recall, that information, or her performance
suffers dramatically. Memory has three main components: short-term, active-working
and long-term.

NEUROMOTOR FUNCTIONS
Neuromotor functions rely on the connections and interactions between the brain
and muscles. Whether students are trying to write their first words, catch a football,
type at a computer keyboard or draw a picture, the brain’s ability to coordinate
motor or muscle functions is key to many areas of learning.

SOCIAL COGNITION
One of the often overlooked components of learning is the ability to succeed in
social relationships with peers, parents, and teachers. Students may be strong in
other construct areas, and yet have academic difficulties because of an inability
to make friends, work in groups, cope effectively with peer pressure and/or relate
well to adult.

SPATIAL ORDERING
Closely related to the functions of time and sequence, spatial ordering is the
ability to distinguish between spatial configurations, such as a circle and square,
or to remember related information using images. On a more complex level, spatial
ordering helps musicians, for instance, "see" a piano keyboard or architects "
imagine"the shape of a particular room.

TEMPORAL-SEQUENTIAL ORDERING
Temporal-sequential ordering is the ability to interpret, remember and create
information in a specific order or sequence. The order in which data or information
is presented often affects its meaning or application. Examples include telling time,
the order of steps in a mathematical problem, time management and the motor
movements needed for cursive writing.

CROSS CONSTRUCT PHENOMENA:
In a neurodevelopmental learning profile, there are constructs that often
influence one another. In addition, pace, volume, strategy use and metacognition
(the ability to think about one’s own thinking) may also affect a student’s performance.
Powered by